How to Get Control of that Voice Inside your Head 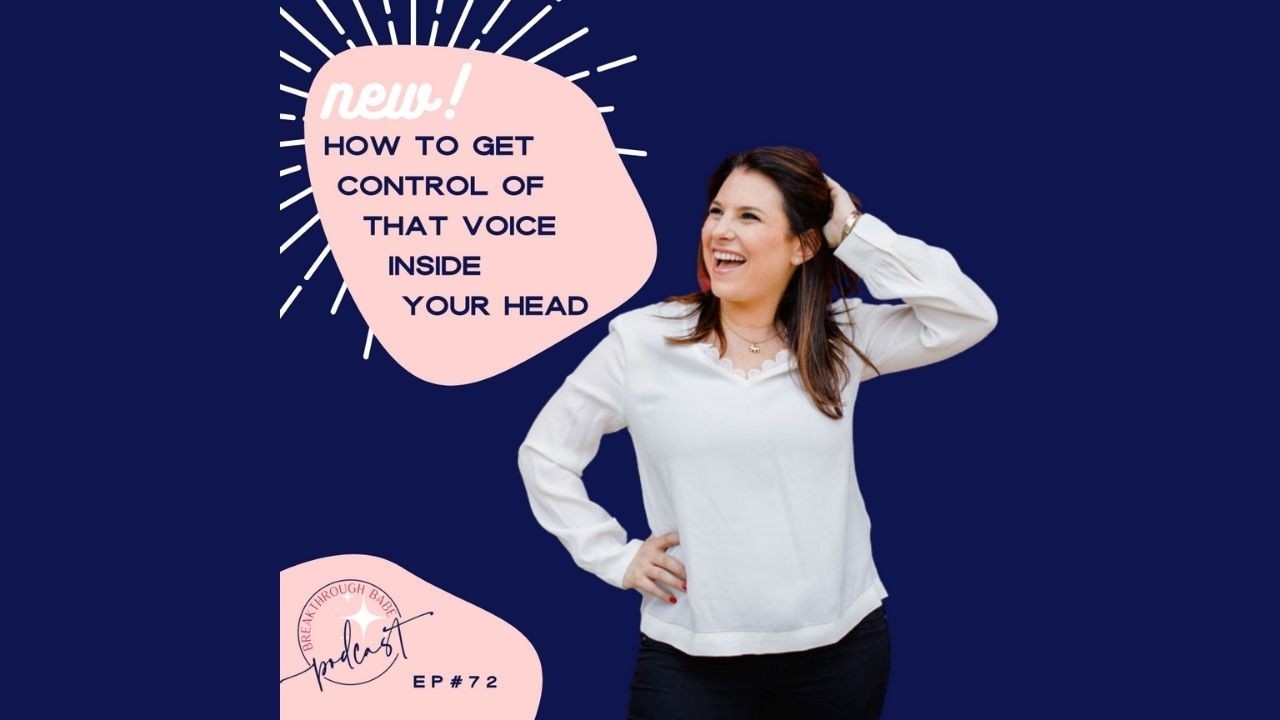 In fact, it’s not just you - it’s something everyone around you is dealing with too. And it’s something that, when left unmanaged, can really wreak havoc on your progress in both your business and your life overall. Care to take a guess as to what I’m referring to?

It’s the negative voice inside your head.

Now, I don’t often talk about the voice inside my head. But, I’d like to be incredibly transparent with you because this voice is a major contributing factor in our eventual success… or failure.

Ever since I got control of that voice in my head, truly amazing (dare I say, magical) things have transpired in my life and business. And I want the same to happen for YOU.

How often do you hear the negative voice? How often are you consciously aware of it?

Sound familiar? I’m pretty sure you know what I'm talking about.

Don't you just wish that negative thoughts could be handled like a typo on a keyboard? If only you could just press the DELETE button. You know, just backspace over that crap and move on. Unfortunately, as simple as that sounds, you can't really do that with those negative thoughts inside your head. They have to be handled a bit differently.

The first step is becoming aware of when negative thoughts are happening.

When I first started to become aware of my negative voice, I decided I’d name her. I call her, “Jerky.” And let me tell you, when Jerky comes out to play, she’s not messing around.

Jerky has stopped me from doing plenty of productive things over the years. Most recently, I realized it had been Jerky all along that had gotten in the way of me launching the online networking community I’d been dreaming about.

If you’ve been following me on Instagram, you know I just recently launched my new venture, CEO Club. While it’s only just launched, I have been thinking about this for a long time (it just didn't have a name yet). I knew I wanted to launch an online networking group where I could get great people together in a space where they could meet each other, support each other, help each other grow, and create connections for each other. And the thing is, I already knew exactly how to do it because I'd done it successfully before. But Jerky got in the way for years. She told me all the reasons why it couldn't happen - and I believed her.

But guess what I’ve learned? I get to control Jerky.

The great news: You get to control that voice inside your head, too.

Think about it like Spotify, where you pull up a playlist and a song comes on. If you like the song, you end up dancing along and it's all fun and good. It's propelling you forward, and it's creating the atmosphere that you want. But, then a song comes on that you don't want. Because it’s Spotify, all you have to do is hit the NEXT button. Then, you’re right back to the upbeat mood you’d cultivated just minutes before. Wouldn’t it be nice to be able to do that with your thoughts?

You can. This is what controlling your mindset is all about. You need to create the self-discipline where when that negative voice begins to creep in, you can hit that NEXT button. You can change the way you listen to that voice to the point that you can literally tune it out.

Now, I realize this isn't easy. It’s something that happens over time. Your negative thoughts didn't happen in a day, so you can’t expect them to just disappear in one day. But with time and awareness, you can create better outcomes by creating better thoughts.

Begin by creating awareness around your thoughts. Stop being a passive listener and get active. Journal about what’s going on in your head. Read what you’re writing, and get tuned in to what your inner voice is telling you.

What are these thoughts preventing you from achieving? What are they holding you back from doing?

Remember: our limiting beliefs start out as thoughts, then they become the stories that we tell ourselves over and over again, and then they become beliefs that we identify with. We must first tune into them to be able to tune them out.

Tuning in, tuning out

It’s time that they’re not even a part of your vibration, that they're not even something that you're putting out there into the universe.

When you tune into the negative and your focus is on the negative, guess what? It becomes a self-fulfilling prophecy, because that's what your focus is. You get stuck in a web of negativity.

But, if you tune into the positive and your focus is on the positive, that, too, becomes a self-fulfilling prophecy.

When we begin to question the source of our negative thoughts, we can then recognize where they came from. When we see what they’re rooted in and how they’re no longer serving us, it becomes far easier to shake them off. From there, we can create positive affirmations and positive thoughts to replace them with. It takes practice and it takes time, but little by little, you begin to shift how your inner voice speaks to you.

Lately, I have been so tuned into this higher frequency that the synchronicities have been insane. Situation after situation, I’ve wished for something and before I know it, I've manifested it. And I am certain this is because of some of the things in my life that I have intentionally changed such as my desire to tune out that negative vibration. Where once negative thoughts got in my way, now that I’ve said I’m done with them, they’re done holding me back.

And guess what? You can change your tune as well. Powerful shifts can happen in your business and life too. It all starts in your head.

If you’re tired of self-doubt, uncertainty, and fear stifling your progress, you can work with me, one-on-one. It’s often easier (not to mention faster) to have an external coach help you recognize the thoughts in motion. I can give you a process by which you can turn down or tune out the negative thoughts + vibrations, and really tune into your own positive, self-fulfilling prophecy. If that sounds appealing to you, feel free to reach out. This is also something we do together monthly in my coaching group calls. You can check out that program here.

Subscribe and get our new blog posts straight to your inbox. 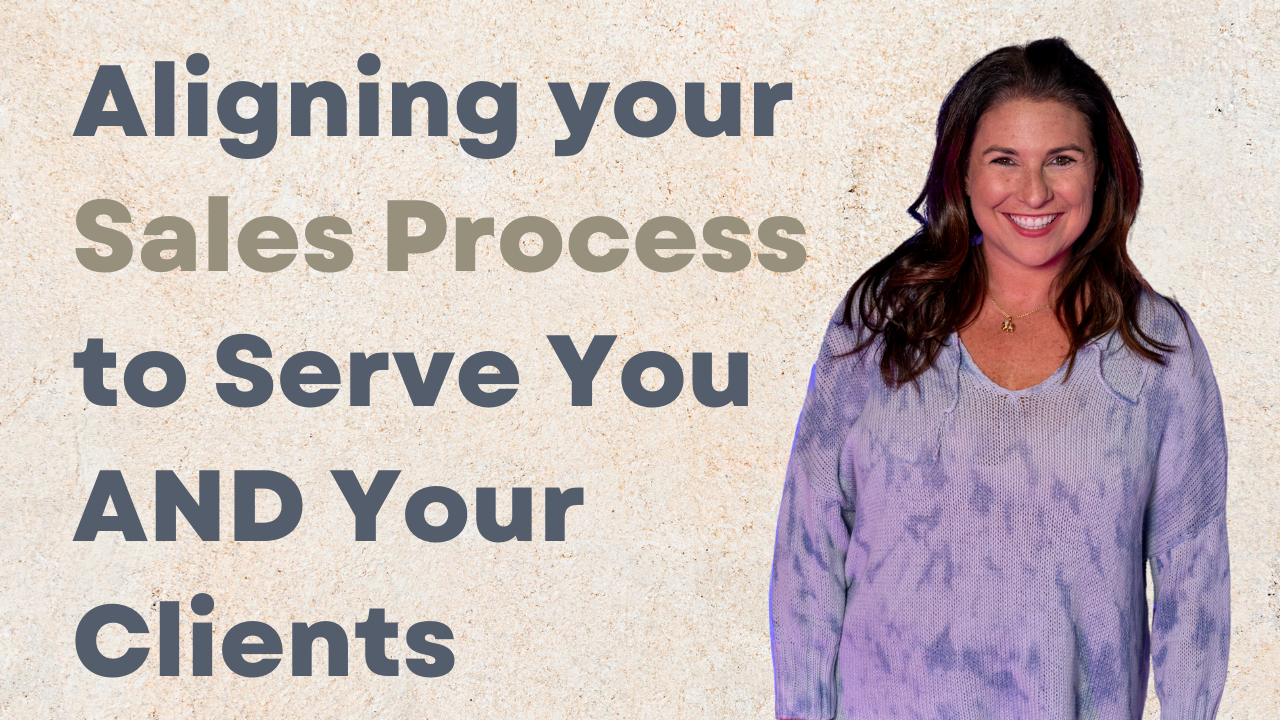 Aligning your Sales Process to Serve You AND Your Clients 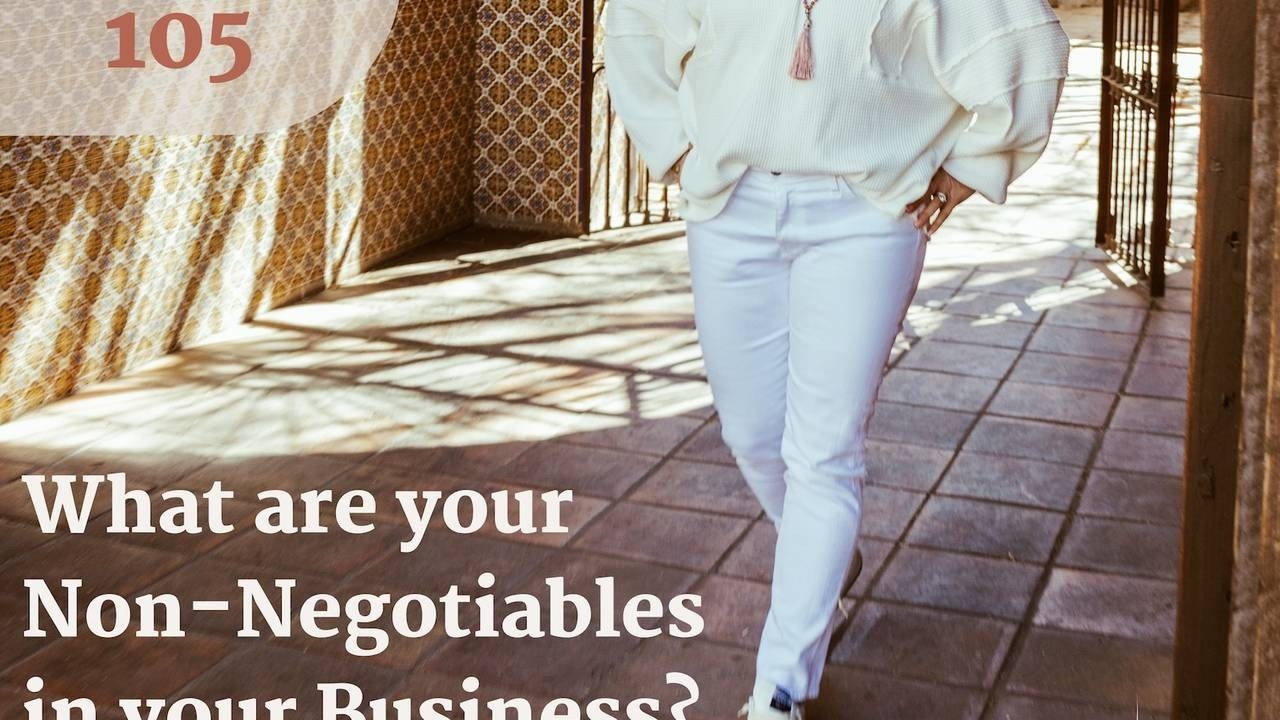 What are your Non-Negotiables in your Business? 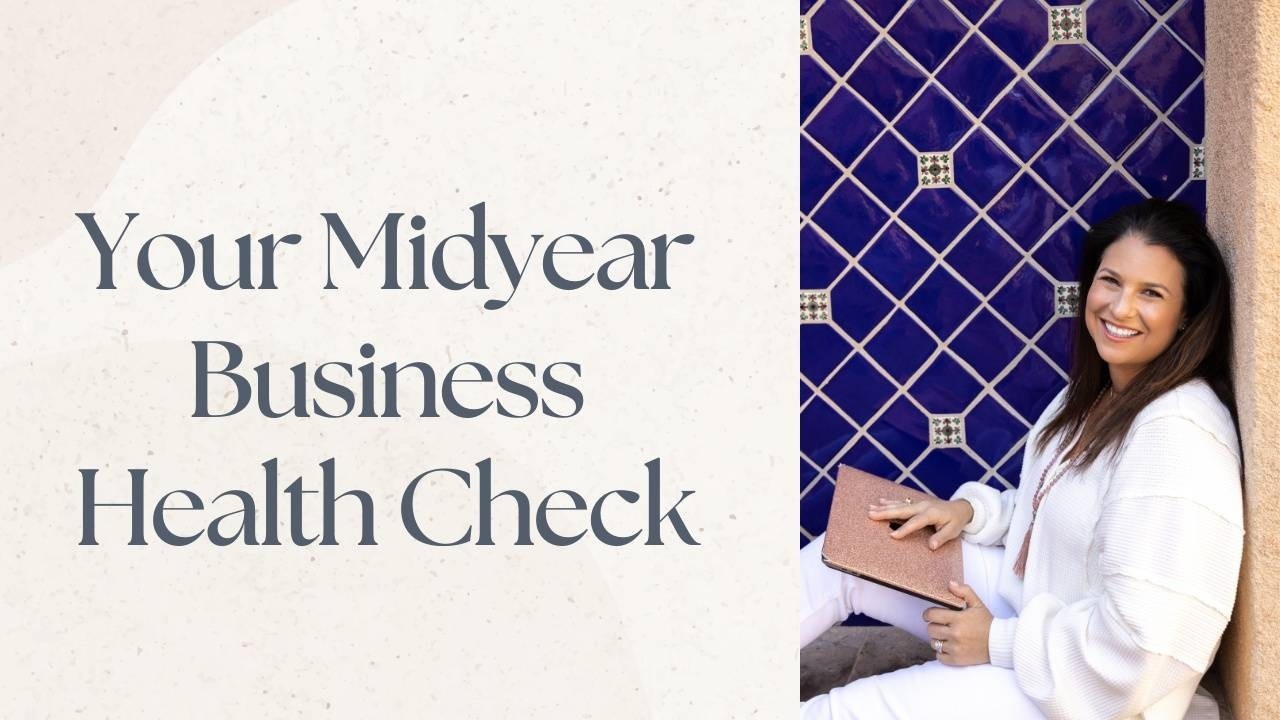 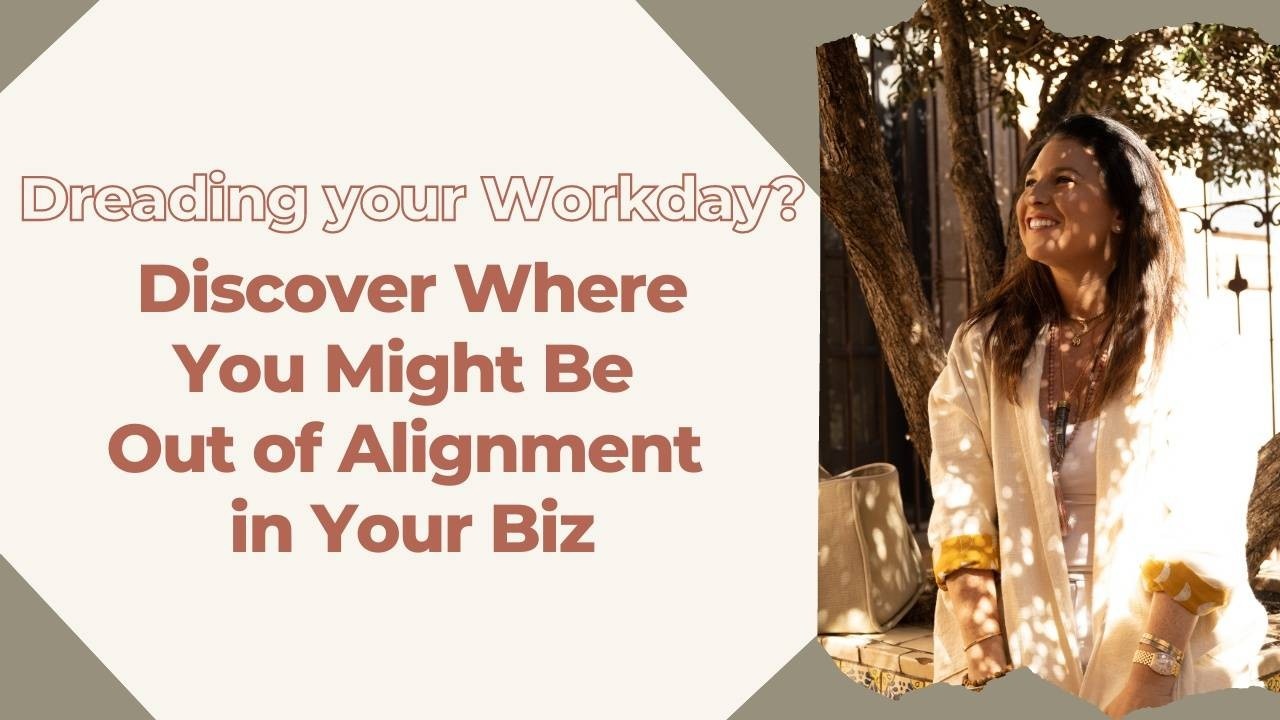 Dreading your Workday? Discover Where You Might Be Out of Alignment... 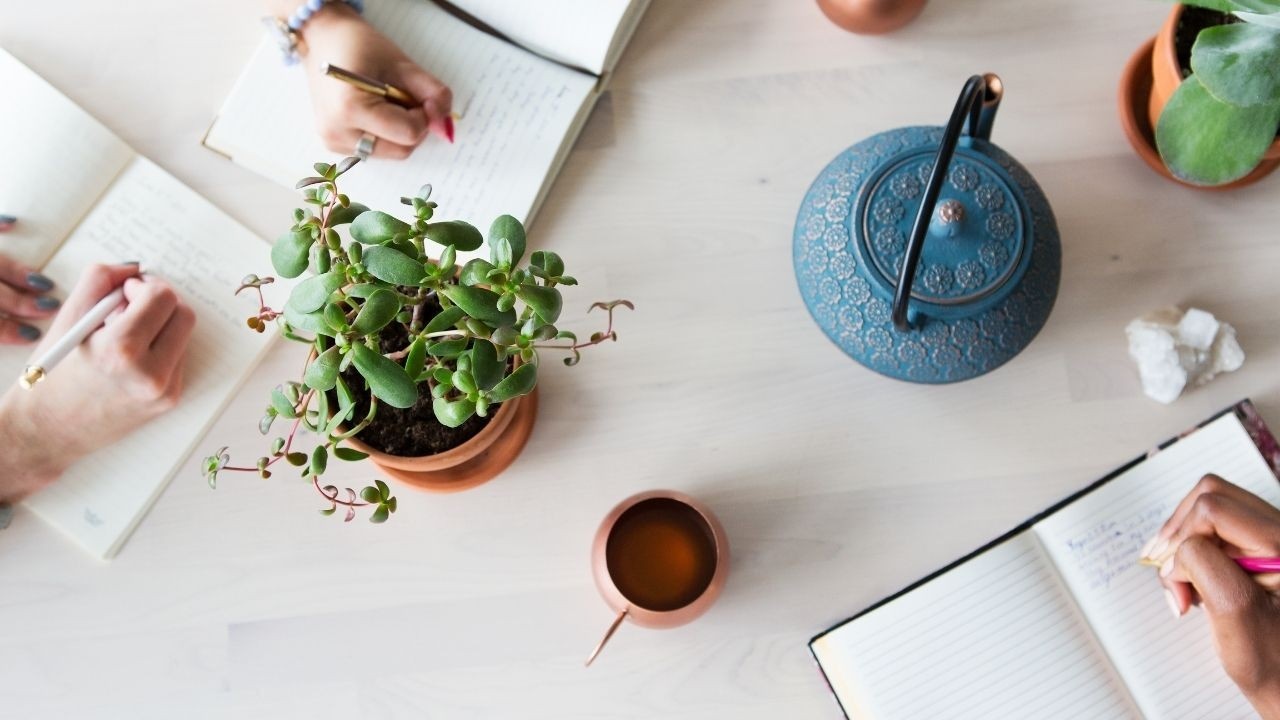 Subscribe and get our new blog posts straight to your inbox.